This inquisitive whale is uncommon but, in waters in which it lives, it is known to approach boats. It is active and playful, and is less aggressive than the Pygmy Killer Whale, which is smaller than this whale variety. However, it has been observed aggressively hunting dolphins and even the whale calves of much larger varieties on occasion. 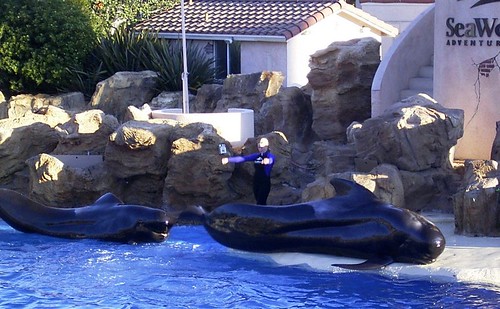 False Killer Whales in a show on display.

The False Killer Whale has a dark grey or black-grey body. In certain lights, though, the head can appear light grey. On the chest of some individuals, a light grey or almost-white W-shaped marking appears.

The head of the False Killer Whale is slender and elongated, tapering to a rounded snout.

Its dorsal fin is large and usually pointed. It has a distinctly concave trailing edge, as does its tail fin. The fluke also has a clear notch in the centre. Its two pectoral fins are characteristic for their S-shaped “elbow” (which refers simply to the shape, as the flipper is not jointed).

Adult whales measure between 4.3 and six metres in length, which is the equivalent of 14 to 19 feet. They weigh between 1.1 and 2.2 tonnes.

False Killer Whales are playful and acrobatic, making sudden stops and turns (particularly when hunting). They swim fast, and often allow their entire head and much of their body to leave the water when they emerge for air.

They breach playfully, twisting their bodies in the air and causing a huge splash when they descend back into the water. Its leaps can be very graceful too, making them a pleasure to watch for fortunate spectators.

The False Killer Whale typically travels in pods of between 10 and 50 individuals, but has been seen in pods of up to 300.

Where to Find Them
False Killer Whales are widely distributed within the deep subtropical, tropical and temperate waters of the world. They are also sometimes found in enclosed seas, such as the Mediterranean.

Diet
The False Killer Whales has between 16 and 22 teeth on each of its jaws and is a capable hunter. It feeds on squid and fish, but will indulge in other smaller marine mammals when it has the opportunity.

Threats
Because of the friendly nature of this whale, it is often a victim of whaling, since it does not shy away from humans. It is also frequently caught in fishing nets. Once entangled, it soon drowns as it cannot reach the surface for air.