Mating behaviour is a characteristic that occurs in the DNA of almost every living creature. Whether large or small, insect or, indeed, human being, we all follow a basic pattern of behaviour that indicates that we are ready, willing and / or able to mate.

Whales are no exception. They follow a specific set of actions and behaviour, which are fascinating for us to observe and document. However, because there are so many different whale species, it is not possible to define one or two set behaviours across the board. 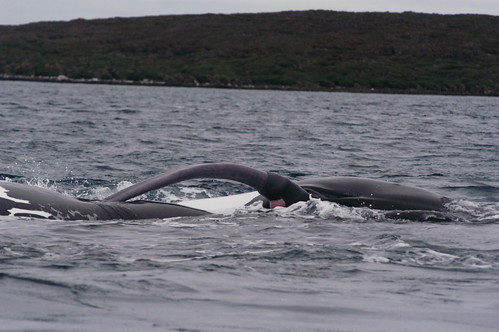 Many whales migrate as part of their mating behaviour. This is done in order for the animals that live in the cold waters to travel to warmer areas in which to feed, mate and give birth. It is for this long trip that migrating species have built up their layer of blubber, which keeps them warm and acts as a source of energy, since there may not be much food available to them en route.

Of course, not all species migrate. Some stay within a defined habitat. On the other hand, some males are perpetually in a state of migration in search of mating partners. The latter is true of the male Sperm Whale, for example. Killer Whales migrate, but more for the purposes of finding food than for mating and breeding.

The following behaviour is often associated with mating, as it shows off the youthful strength and vitality of the whales, and attracts the females’ attention:

Lobtailing – splashing the surface of the water with a powerful downward force of the tail. The loud splashing noise can be heard over long distances, as water carries the sound waves far more effectively than the less dense air through which we usually hear sounds.

Breaching – the whale hurls itself out of the water, usually exposing up to 40% of its mammoth body. In addition to showing off their strength to the females, this action also asserts dominance when the whale is amongst others of its kind.

Spyhopping – in this behaviour, the whale raises its head and rostrum out of the water and holds it there, relying on buoyancy to maintain its position, rather than on swimming.

Charging – males will sometimes make an aggressive attack on other males by charging them. This will assert who is stronger and, therefore, more deserving of mating with the female. However, it can lead to massive internal injuries.

Singing – communication among whales occurs in a number of ways. Some males (especially Humpbacks) will produce a melodic composition of sounds that is designed to impress and attract the female. These range in volume and pitch, and are of huge interest to human researchers.

One of the ways in which a Humpback Whale impresses and excites a female is by blowing bubbles beneath her, so that they gently stimulate her genitals. However, as is characteristic of the female, she remains aloof.

Females go into oestrus several times per annum. It is during these times that she will be looking for a mate. She will choose the male mate that she perceives to be the strongest, as this should give her offspring the best chance of survival.

Once the mating season is over, the whales will return to their feeding grounds and continue a life of feeding or hunting until the young are ready to be born.