The Bowhead Whale is the heaviest of all whales in relation to its body size; although no one has ever had the opportunity of weighing an entire specimen in one go. This species is named for its bow-shaped skull, which accommodates its baleen plates. This is the only one of the large whales that lives and remains in the Arctic area. This whale is classified as being rare. 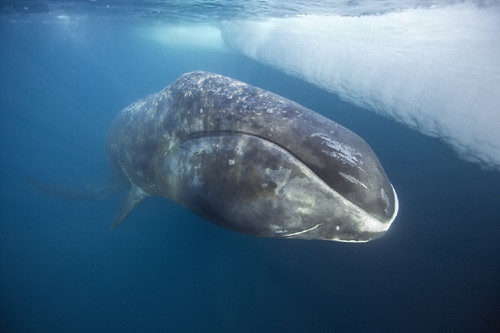 Due to the fact that the Bowhead Whale remains in the icy waters of the Arctic, it needs a very thick insulating layer of blubber to provide heat and energy. This blubber can get to be up to about 70 centimetres (or 28 inches) thick. The whale frequently uses its large, powerful head to break ice that is up to 30 centimetres (12 inches) thick to create a breathing hole in the water’s surface.

The Bowhead Whale has no dorsal fin and a proportionally large head. It is very dark in colour. It has two distinct humps along its back, which can be seen in profile, and a white patch on its chin. Some individuals also have pale grey or white markings around the area just before the tail too.

Adults are usually between 14 and 18 metres in length. The width of the tail fin, or fluke, can be almost half of the length of the entire body, enabling powerful thrusts through the icy waters.

Behaviour
The Bowhead Whale does not spyhop, breach or lobtail very often, but it has been observed doing so on rare occasions. When they partake in such activities, it is usually done alone. This whale feeds at or just below the surface of the ocean, but is also believed to dive deep down and sometimes dine at seabed level. The Bowhead Whale will spend between one and three minutes at the surface, blowing out air between four and six times. They then dive down to more than 200 metres (or over 650 feet) below the surface, staying underwater for anywhere from four to 20 minutes at a time. Often, the Bowhead Whale will continue to surface in the same place, making the hunting of them a little easier, unfortunately.

Where to Find Them
This whale species lives in the Arctic, usually at the edge of the pack-ice areas of these freezing waters. They migrate over very short areas, usually depending on the movement of the ice. They will move north in the winter and south in the summer.

Diet
Bowhead Whales feed on krill and other small invertebrates that are sucked in and trapped by their baleen plates.

Threats
This whale is rare and faces the very real threats of whale hunters, pollution and the destruction of their habitat. As the global climate continues to degenerate, the ice continues to melt, giving these animals less and less natural habitat in which to continue living.