The whale is a mammal and, as such, has a skeleton that is fairly similar to other mammals. This applies especially in terms of the backbone (or spine), shoulder blades and ribcage; which all closely resemble those of other animals. The ribs are fairly flimsy, though, and are not attached to the spine or breastbone very strongly. The whale is supported by the water, so really firm bone attachments are not necessary.

Whales are also set apart by the fact that they lack hind legs. Interestingly, though, whales do have two small, undeveloped bones that are concealed within the muscle tissue of the hip. Many believe that these bones are the remnants of legs that existed in prehistoric whales that used them for locomotive purposes millennia ago.

Almost all mammals, regardless of their size, have seven vertebrae that make up their neck. Whales, however, have an interesting adaptation. Because their heads are so large and heavy, their necks need to be immensely strong to support them, particularly since they do not rely on gravity in the way that human beings do. Therefore, the neck vertebrae of the whale are fused into one bone, giving the neck the maximum amount of support possible, preventing the heads from bobbing around as the whale swims. This feature, which attaches the head directly to the body, also means that the whale’s body shape is optimally fusiform; ideal for enabling it to glide through the water with ease. Due to the buoyancy provided by the water, the whale is not really restricted by its heavy skeletal structure. 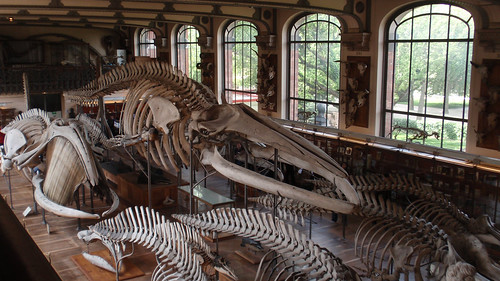 The fins are not supported by the skeleton, but by tough cartilage.

The skulls of baleen whales are vastly different from those of toothed whales. This is due to the fact that these two classes of whales have such different feeding habits and require different adaptations. However, one similarity is that both of these whale classes have telescoped skulls, which means that they are compressed from the front to the back, like a telescope that is not fully extended.

Toothed whales need to have a better sense of hearing that their baleen counterparts, since they need to be able to find prey. Therefore, toothed whales’ skulls are adapted with a smaller cheekbone that insulates the front of the skull (which produces the whale’s sound) from the back of the skull (which receives sounds). The sinuses within the skull are also adapted so that the whale is better equipped to identify the source of a sound.

The skull of baleen whales allows the upper jaw to thrust up into the eye region to increase the size of the mouth and allow a far larger food-processing area (since seizing and chewing prey is not part of the baleen whale’s eating requirements).