The blowhole is to the whale what nostrils are to a human being. It is an integral part of the way that whales breathe. The blowhole is situated on top of the head of the cetaceans, and works like a valve; that is, it can be sealed shut as the animal dives beneath the surface of the water, and opened when it needs to expel air and take a fresh breath out of the water.

The spout moisture that is released as the whale surfaces for a new breath is often mistaken for being sea water that the whale blasts out of its blowhole. However, if this were the case, the whale would be drowning, since the blowhole leads directly to the lungs and, like all breathing mammals, it cannot hold water in its lungs 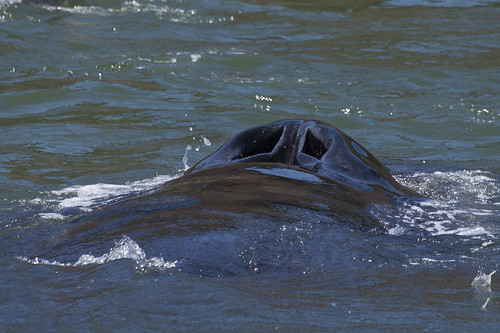 Therefore, upon further research, it was discovered that the whale creates this spout because of the air that it is releasing via the blowhole. Due to the massive temperature differences, a condensation effect occurs, causing the air being breathed out to turn to water vapour. The water vapour also contains oil droplets and mucus, in some animals. The fact that it is not water is proven by the fact that the blowhole is sealed tight until it is completely out of the water. Only then is opened and the air expelled. Vapour is always the result if air is cooled very quickly (a result of gas escaping under pressure).

When the whale dives, its lungs collapse under the pressure of the dense water weighing down on its body. As the lungs collapse, the air in them is pushed into the rigid areas of the respiratory tract. In these areas, no gaseous exchange is possible. Once it reaches a depth at which the lungs are completely collapsed, it can comfortably continue to dive even deeper without causing any damage to itself or its lungs. As it rises to the surface again, its lungs begin to expand, allowing the air back into them.

The temperature change from the warm lungs to the cool external atmosphere also plays an important role in the visibility of the spout, since air that is experiencing more condensation (which will occur in colder climates) will be more visible to spectators.

Whales breathe every five to 15 minutes, but can go for far longer periods without breathing, if necessary. In fact, the mammoth Sperm Whale can survive for up to two hours without taking a fresh breath of air. This allows it to search for food at great depths without being interrupted by the need to surface for air.

Toothed whales have only one blowhole while baleen whales have two. When relaxed, the blowhole is sealed shut. It takes powerful muscles and valves to open the blowhole when the top of the head is completely out of water; allowing air to escape and giving the whale the opportunity to take a fresh breath.

The shape of the spout is used by experts to identify the type of whale responsible for it. For example, Sperm Whales tend to blow the spout forwards and to the left, while Right Whales produce a spout with a distinctly double v-shape.