Whales rely heavily on their sense of hearing, since their sight is compromised in the deep, dark waters of the oceans. Unlike light particles, sound waves travel very well in water, which is denser than the air through which we usually hear. This denser medium carries the sound waves over longer distances effectively. Whales are believed to be able to hear very well at low frequencies (sometimes even hearing the click of an underwater camera, for example). High-frequency sounds may be more difficult for many whales, and entirely impossible for certain of the whale species. 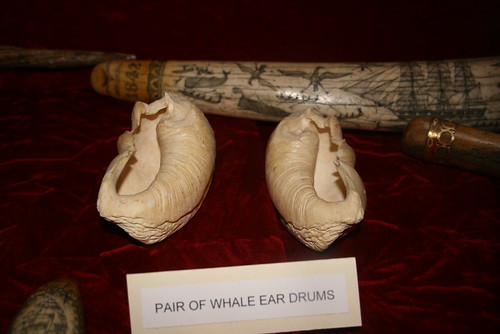 The hearing mechanisms of baleen whales differ slightly to those of their toothed counterparts. Baleen whales have an external opening on either side of the head, known as the ear opening. This leads down to an auditory canal. To protect this canal from being damaged by sea water, there is a waxy plug to block the water from entering. Therefore, sound has to travel through the thick plug and into the canal, compromising its quality somewhat. However, baleen whales do not rely on hearing as much as toothed whales do, since toothed whales are hunters and depend on stimuli (such as sound) to locate their next meal. Baleen whales, on the other hand, simply filter the water for krill as they cruise along; not having to search actively for prey.

Toothed whales lack the waxy plug, and the bones of their ears are not attached directly to the skull bone (an adaptation that prevents vibrations from the skull being perceived as sounds from the surrounding water). The ear bones are bound in a light, airy foam. The bubbles in the foam prevent the sound waves from travelling through the tissues of the animal and may actually isolate the acoustics being picked up, which will aid the whale in ascertaining the direction from which the sound is coming. It is also surmised that some toothed whales actually sense sound through their lower jawbone, since they do not have open ear canals. This bone contains sinuses filled with oil and it is thought that this oil may be the conductor of sound into the ear canal.

In addition to hunting or perceiving danger, whales use their sense of hearing when communicating with one another too. Toothed whales are particularly adept at audible communication. Baleen whales communicate at low frequencies, while toothed whales have a wider range of frequencies in their repertoire. In fact, they are believed to be able to communicate and hear between 20 and 200 000 Hertz. This is a far wider range of hearing than human beings enjoy.