This is the smallest of all of the baleen whales, and also the one about which the least is known. It is seldom seen, and even its blow is small, inconspicuous and indistinct.

Although this might suggest that there are very few remaining individuals of this species, that assumption cannot be confirmed. They may simply be elusive, wisely shying away from human contact. 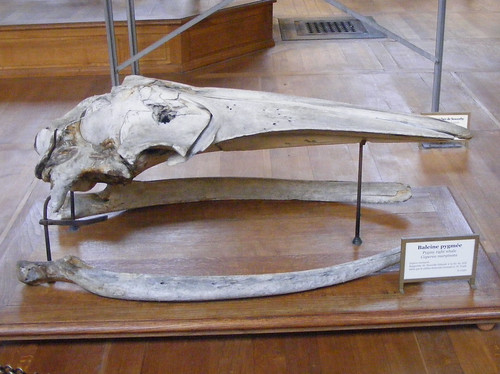 Skull of a Pygmy Right Whale.

Physical Characteristics
The Pygmy Right Whale is dark grey or blue-grey on its dorsal or upper side and light grey on its belly (or underside). The fluke and fins are also dark on the top and light on the bottom. It has a small dorsal fin that is situated quite far down its body and small, narrow flippers. Its blowhole is in a slight depression on the top of its head. This baleen whale has a very arched mouth with white baleen gums and an ivory-coloured baleen plate. The Pygmy Right Whale is frequently confused with the Minke Whale, but is differentiated by the arch of the mouth and the lack of white flipper bands.

Behaviour
This is a seldom observed whale, only spending a few seconds at the surface of the water to breathe. It has never been observed or reported o be spyhopping, lobtailing or breaching. When surfacing, it thrusts its snout out of the water, when a quick flash of its white gums may be visible to onlookers before it dips beneath the water’s surface again. It will stay beneath the water’s surface for anywhere between 40 seconds and four minutes.

Interestingly, the Pygmy Right Whale has been known to associate with other species, such as the Long-finned Pilot Whale, Sei Whale and Minke Whale. Otherwise, adults live and travel alone, or with one other individual.

Where to Find Them
Their exact location and patterns of movement remain a bit of a mystery because these whales are so rarely seen. They have most commonly been observed because of mass strandings on the Australian, New Zealand and South African coastlines. There have also been occasional sightings on the South American coast. There are very few incidents of sightings in the open ocean; the vast majority of sightings having been in shallow bays.

Diet
The Pygmy Right Whale feeds exclusively on plankton or krill, which is a tiny crustacean that lives and travels in swarms of hundreds, or even thousands, of individuals.

Threats
The main threat to the Pygmy Right Whale is entanglement in fishing nets. Trapped below the water’s surface, tied up in the nets used to catch fish, the whale soon drowns.