The Northern Right Whale has significantly lower population numbers than Southern Rights. In fact, there are only a few hundred individuals left, making this an endangered species. 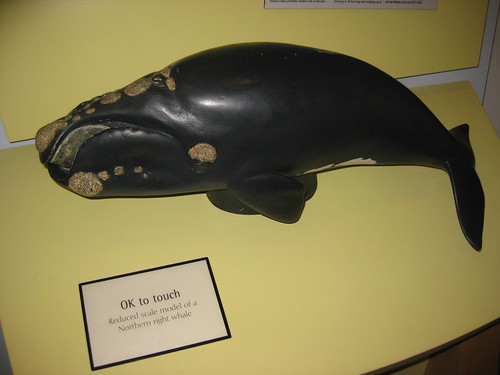 The Northern Right Whale’s body is enormous, stocky and wide. It is almost completely black or dark brown with a slightly lighter mottling in many animals. In addition, there are often white patches on the underside. The chin of this whale is particularly dark.

Like the other subspecies under the Right Whale umbrella, this whale has a very arched mouth. Another common characteristic is the distinctive callosities that are located on the head, just behind the eye, on the tip of the chin and on the tip of the rostrum.

Northern Right Whales have no dorsal fin, but their pectoral fins are large and spatulate. The fluke (or tail fin) is relatively large with a very distinctive notch in the centre and slightly concave, smooth trailing edges.

Adult Northern Right Whales are between 11 and 18 metres long and weigh from 30 to 80 tonnes.

Behaviour
Right Whales are big and bulky, regardless of their subspecies, so it is somewhat surprising that they are playful and active at the water’s surface, where onlookers can enjoy their antics. Northern Right Whales are rare, so they are seldom spotted for that reason. However, they do enjoy breaching and lobtailing.

They are slow swimmers and sometimes even approachable. They are naturally curious, and want to investigate foreign objects within their environment.

Northern Right Whales usually travel alone or in groups of two or three individuals. But, a pod can comprise up to 12 whales, or even more where there is an abundance of food.

Where to Find Them
Northern Right Whales are found in the western North Atlantic, off the coast of Nova Scotia (Canada) and Cape Cod (United States of America). Florida and Georgia are also common breeding grounds for this particular whale variety.

Diet
Right Whales are baleen whales, which means that they suck water into their mouths, sieve it in the large baleen plates in their mouths and trap the krill (tiny crustaceans) in the fine hair-like structures.

Threats
The Northern Right Whale’s numbers are already hugely diminished and their existence threatened. Being caught in fishing nets is one way in which several of these animals have died, being drowned as they were prevented from getting to the water’s surface for air. In addition, human disturbance (such as urbanisation or too many boats in their natural habitat), as well as the destruction of their habitat at the hands of people are also major threats to their numbers.