Known as the most playful and energetic of all of the large whales, the Humpback Whale is often seen as it breaches, spyhops and lobtails at the water’s surface. They are rewarding to watch for this very reason. In South Africa, the Humpback Whale is commonly seen along the coastline between the months of July and December.

Sadly, whalers target Humpback Whales, which are especially easy to hunt for their antics at the surface of the water. As a result, their population numbers have been drastically reduced. 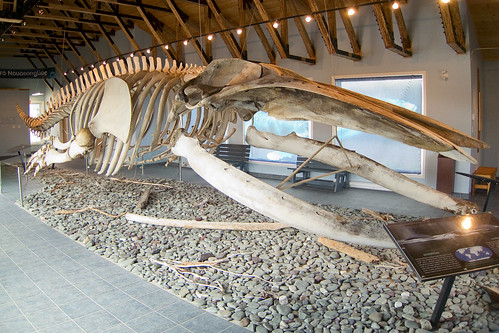 The Humpback Whale has a large, robust body that is dark grey or blue-back in colour on the top. The underside may also be dark, but is light or even white in some individuals. The head is slender when seen from the side, with knobs on the top of the head and the lower jaw. Near the very tip of the lower jaw is a round protrusion.

The dorsal fin is small and stubby, with a distinctive hump in front of it. Generally, these fins have a broad base. The pectoral fins are very long in proportion to the body.

The Atlantic Humpback Whale generally has a white flipper with some small black markings, while the Pacific Humpback’s pectorals are usually black on the upper side and white below. The broad tail fins have a dark upper side and white patches underneath with a distinctive central notch and very knobbly trailing edges. Adult Humpback Whales reach an average length of 11.5 to 15 metres and weigh between 25 and 30 tonnes.

Behaviour
As mentioned, the Humpback Whale is active and playful. It is often seen at the water’s surface, sometimes floating on its back with one or both pectoral flippers in the air. It is a slow swimmer, and is curious enough to approach boats, sometimes to its own detriment.

The Humpback Whale will blow four to eight times at approximately 20-second intervals. Thereafter, it will dive below the surface of the water, where it will stay for between three and nine minutes at a time.

Although Humpback Whales often travel alone, they may also live in groups of between three and 15 individuals.

Males can be aggressive with one another, which is evident from the scarring on their bodies.

Where to Find Them
Humpback Whales have a wide distribution, and are found in all of the world’s oceans, whether ice-packed or tropical. This whale species spends winter in the high-latitude feeding grounds, where the water is cold. In summer, it migrates to low-latitudes, where it breeds in the warmer waters of the tropics.

Diet
Humpback Whales are baleen whales, with between 270 and 400 baleen plates on either side of their mouths. This means that they feed on the food that gets caught in these sieve-like plates, which includes krill and small fish. Due to their large size, the Humpbacks have to consume plenty of food in order to survive.

Threats
Because he Humpback Whale is found so extensively around the world, its threats are increased. They often succumb to fishing nets, in which they become tangled and drown. They are also victims of pollution and whaling.