There is little known about this elusive species of whale, which is often confused with (and even thought to be the same as) Baird’s Beaked Whale. Because so little is known about it, ascertaining its population numbers and, therefore, protection status has been impossible with modern technology and equipment. Interestingly, the Arnoux’s Beaked Whale is distinguished by its front teeth, which are visible even when the mouth is shut. 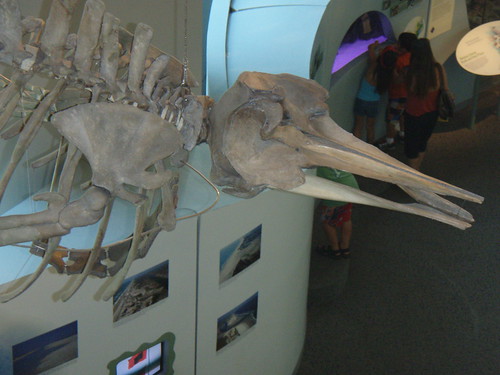 Physical Characteristics
The Baird’s Beaked Whale has a distinctly bulbous forehead with an indentation situated right around the blowhole. Its body is long and that of the male is usually extensively scarred. The underside often has white blotching in places.

The small dorsal fin is situated about three-quarters of the way down the body. The pectoral flippers are also small, and are rather rounded in shape. These two flippers are situated close to the front of the body, close to the underside of the head. The flukes are quite small with almost straight trailing edges and a small notch.

Behaviour
Baird’s Beaked Whales are quite approachable, except when in the presence of boats in areas in which they are frequently hunted. This indicates that they can recognise and remember these areas and avoid perceived dangers in future.

They usually dive for between 25 and 30 minutes at a time. When they surface, their foreheads and beaks exit the water first, and they rarely stay at the surface for longer than five minutes.

The Baird’s Beaked Whale has been observed spyhopping, lobtailing and logging.

They swim in tight packs of three to 30 individuals. However, large groups of up to 50 whales have, rarely, been observed.

Where to Find Them
Technically, the habitat of the Baird’s Beaked Whale is the deep temperate and subarctic waters of the northern Pacific Ocean. They are most often seen around areas of Japan, Canada and northwest of Hawaii. They will, usually, stick close to continental shelves.

Threats
Due to the fact that these whales dwell in areas that are not frequented by whaling ships and do not experience the degree of pollution and human interference that many other areas do, the threats facing the Baird’s Beaked Whale remain largely unknown.